Chris’s final duty as Chief Fire Officer was to present Long Service Good Conduct medals to 22 staff at the Service’s training centre in Chorley. At the ceremony, Chris was also presented with his own medal which recognises his 40 years in the fire service.

Chris began his career in Merseyside in 1978 before transferring to Lancashire to take charge of the Service Training Centre at Chorley in 2000. He subsequently progressed to be Assistant Chief Officer in 2003 and then Chief Fire Officer in 2012.

As teenager though, a career in the fire service was not in the forefront of Chris’s mind. He explains:

“I saw that Merseyside Fire and Rescue Service were recruiting for firefighters during my university gap year. I applied for all the wrong reasons, planning to stay for a year to kill some time and earn some money so today marks the end of my 40 year university gap year.”

Chris has led on a number of projects for Lancashire Fire and Rescue Service including the Regional Control Centre Project and secured government approval for the North West on the Private Finance Initiative project to deliver 16 new fire stations across Lancashire, Merseyside and Cumbria.

Chris was in the first cohort of students to pass the Fire Engineering Degree at the University of Central Lancashire in 1995, which was specially tailored for the needs of senior fire service managers. He was one of the first officers in the country to use academic qualifications, coupled with the technical experience from within the Service, to attain Chartered Engineer status in 1997.  He has since built on these foundations with two Masters Degrees, one in Management and one in Fire Command. At the end of 2013, Chris was awarded the Queens Fire Service Medal in the Queen’s New Year’s Honours List.

“I have had a fantastic career and there are so many people to thank for helping me along the way. I am lucky to have had wonderful colleagues; their dedication, professionalism and friendship have been second to none and I truly believe that Lancashire Fire and Rescue Service’s greatest asset is its staff. I’d also like to thank the Combined Fire Authority for giving me the opportunity to lead this fantastic organisation and for the support they have given me over the years.

“I will be leaving the Service on high following the successful HMICFRS inspection report in December and I know that I am leaving the Service in a safe pair of hands with Justin Johnston and the other members of the Executive Board. I wish Justin and the whole Service the best of luck in the future.” 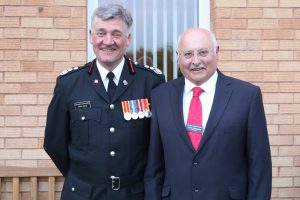 “On behalf of the whole Combined Fire Authority, I’d like to thank Chris for the work he has done as Chief Fire Officer over the last six and half years and congratulate him on his outstanding career.

“We have faced many challenges together with austerity, the move to North West Fire Control, firefighter strikes and the challenges to the governance of the authority but we have still managed to enhance the service that is provided to the people in Lancashire. This was highlighted in the inspection report produced by HMICFRS in December where Lancashire was only service in the first tranche to receive an outstanding. Chris’ leadership and decision making skills has played a key role in our success. I wish him all the very best in his retirement.”