On Tuesday 18 December, children from Flakefleet Primary School in Fleetwood visited Fleetwood Fire station to promote their song in the race for Christmas Number One but also learn about fire safety.

The children from the school have entered the charts with their song ‘Light Up’ and on Tuesday, the pupils sang their song with firefighters, police officers and paramedics to guests from the Alzheimer’s Socity. The Mayor and Mayoress of Wyre also attended the station to meet the children. 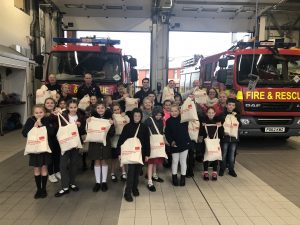 Whilst at the station, the pupils learnt about fire safety messages and in particular those at the forefront of our minds in the run up to Christmas and the continuing cold weather. The key messages included making sure those vulnerable family members; friends and neighbours are safe during periods of very cold weather. Lancashire Fire and Rescue Service have recently launched their Safe and Well campaign and the children passed on the ‘safe and warm’ packs to elderly residents. The children left smiling and with promises to look after those that need looking after the most during the winter months, spreading the message far and wide to friends, family and neighbours. They also learnt about the importance of not drying clothes on heaters and always keeping heaters a metre away from people, furnishings and other flammable items.

Station Manager, George Preston says: “It is a great honour for our firefighters to meet the children, show them the station and equipment. For the children, it will give them a chance to meet their local community heroes and hopefully the messages that we give them will help keep people that they know safer over the winter months. At the end of the morning the hope is that we can all join with the kids to sing the song to vulnerable people from the area who will hopefully be joining us.” 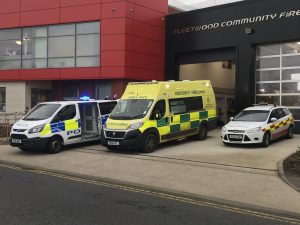 Andrea Smith who is a Dementia Advisor for Alzheimer’s Society in Blackpool said: “It was a privilege to attend Lancashire Fire Service today and see Flakefleet Primary School perform their song to Alzheimer’s Society and people affected by dementia at the station. ‘Light Up’ is an amazing example of how everyone can join the growing dementia movement and Lancashire Fire Station are also setting an excellent example of this with all their staff being Dementia Friends. The children of Flakefleet Primary School have created a song with a powerful message- and by visiting people in a local care home, are showing how people with dementia can be better included in their community. This is a great example of different generations uniting to help people live well with dementia today and to beat it for the future.

Andrea continued: “there are 16,280 people living with dementia in Lancashire. However, too many face it alone without adequate support. We urgently need to find a cure and offer help and understanding to people affected. Alzheimer’s Society is here for anyone affected by dementia and we want everyone to get behind this powerful song and help it get to the number one spot this Christmas, as well as being inspired to help people with dementia in their community over the festive season and beyond.”

You can view the video from the day here.