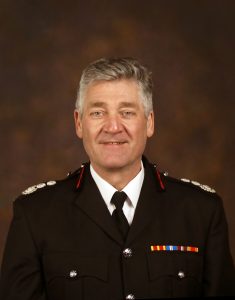 Tonight it was announced that former Chief Fire Officer, Chris Kenny, has been awarded an OBE in the Queen’s New Year Honours list.

Chris was appointed Chief Fire Officer in 2012 before retiring earlier this year. During the course of his career, Chris led on a number of projects for Lancashire Fire and Rescue Service including the Regional Control Centre Project and secured government approval for the North West on the Private Finance Initiative project to deliver 16 new fire stations across Lancashire, Merseyside and Cumbria.

“It is a great honour to be awarded an OBE and to be recognised for my work in the fire and rescue service over the last 40 years.

“It has been the professionalism of the staff in Lancashire that set us apart from other organisations and the reason that the Service is held in such high regard by its communities and partners.

“Finally, I would like to thank my family and friends who have supported me during my career.”

“I congratulate Chris for receiving an OBE, it is well deserved and not only recognises his work with the Service but also for the contribution he has made to the Fire Fighters Charity during the course of his career.”