Frederick had not long lost his wife of 75 years, and was still adjusting to a life of independent living. Most of his family had moved away for work purposes and every Friday he would be visited by his carer- this would often be the only human contact Frederick had during the week.

Frederick was very much used to doing the chores, like putting out the bins or letting the cat in and out of the house, and so he had no reason to believe that this day would be any different. Unbeknown to Frederick the winds had picked up dramatically overnight. He’s partially deaf and so was unable to hear the roaring outside, and he always keeps his curtains drawn to keep in the heat, and because he fears that burglars might target him. Tomorrow was bin day, and so as per usual Frederick proceeded to take out the rubbish through his garage door. As he opened it, the door was caught by a sudden gust causing it to slam shut, striking him over the head in the process. Ordinarily, Frederick could have counted on his wife, or his carer to come to his aid, but because it was a Sunday no one came. 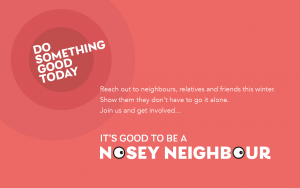 Cold, injured, alone, afraid and unable to lift himself, Frederick had been outside for 14 hours. He had been bleeding quite heavily from an open wound at the top of his head, and he was worried that no-one would find him as he looked down his driveway at cars and passers by going about their typical rush hour business. Time passed, and he had started to become hopeless and began fearing for his life. It was by chance that his next door neighbour, who is also elderly, was out for the day, and so a courier had to deliver her parcel to Frederick’s house instead. Luckily, the courier driver noticed Frederick and immediately called 999. The ambulance service wasted no time in treating Frederick and admitting him to hospital where he made a full recovery.

Frederick was lucky, and this situation could have ended very differently indeed. It is stories like these which make us feel so passionately about our winter safety campaign. So when we say ‘It’s good to be a Nosey Neighbour’ we don’t mean peaking, sneaking or creeping, we mean it’s good to be there and look out for neighbours, loved ones and those living around you. Just think…do you have a Frederick living in your community? Get involved with our campaign by following and sharing our winter safety information, and join in the conversation with the hashtag #NoseyNeighbour or sign up by clicking here.

*This is a true story, although some details have been changed to preserve the anonymity of the victim, including the use of stock images, available here: https://bit.ly/2X7tkrE