Lancashire Fire and Rescue Service (LFRS) are introducing a new fire engine into their fleet and are seeking the public’s help to give it a name.

Following the success of the Stinger fire engine which was added to the fleet at Blackburn Fire Station, following an initial trial period in 2018, the decision was made to purchase an additional Stinger appliance for Southern area. The Stinger was found to have contributed to saving lives, preventing significant fire damage to buildings and increasing firefighter safety.

The Stinger got its name due to the 45cm piercing spike that fires from the extendable arm to pierce through slate and other material to fight fires without having to commit firefighters on the ground into potentially unsafe structures. 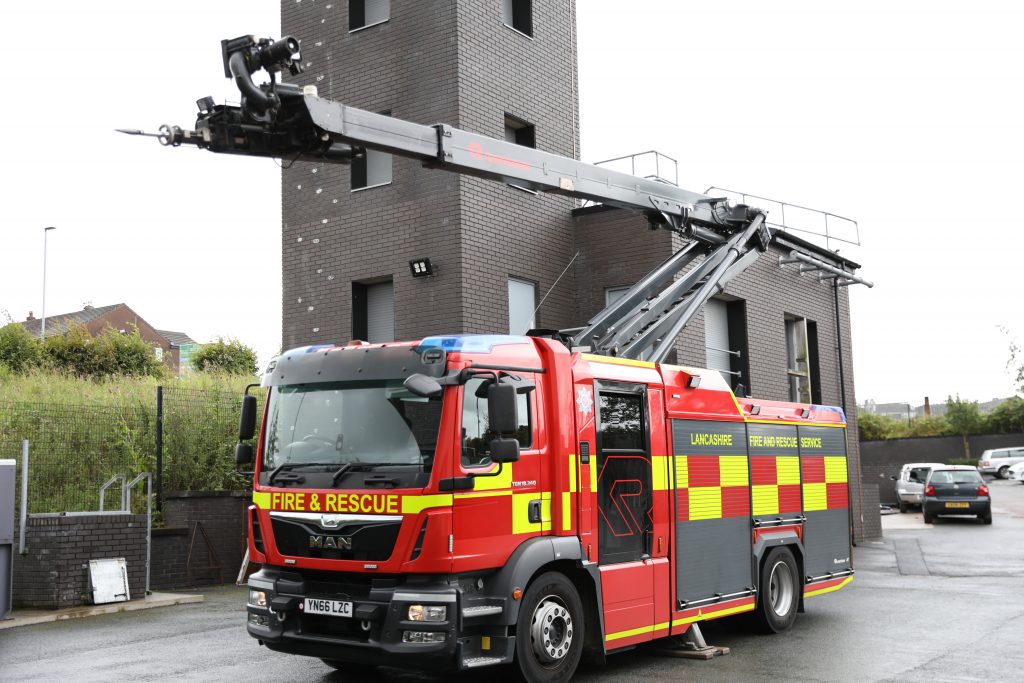 The second Stinger has once again been manufactured by Rosenbauer UK Ltd and features all the modifications that the Blackburn crew found necessary as well as newer technologies and equipment. ‘Stinger 2’ has battery powered road traffic collision cutting equipment, thermal imaging monitor and HD camera which can also be controlled wirelessly.

With the original Stinger remaining at Blackburn Fire Station LFRS are looking to the people of Lancashire to name ‘Stinger 2’ as it joins the fleet at Skelmersdale Fire Station, alongside the on-call fire engine, on 4 September.

Chief Fire Officer, Justin Johnston, said; “we love serving the public and we usually get a lot of waves when we are out and about and people wanting to visit stations so we thought that by introducing our latest fire engine publically they’d see what its capabilities are, how it will be a benefit at incidents and also enable the public to give it a warm Lancashire welcome by choosing a name for it themselves.”

Justin continued by saying: “We loved seeing how inventive people got with Doncaster’s gritting machine and Wyre councils’ road sweeper name competition so we’re very excited to see what the people of Lancashire come up with for our second Stinger appliance. The Stinger has so many features that we are looking forward to seeing some inventive names.”

The work leading up to the Stinger appliance initially arriving into Lancashire dates back to 2012 when support staff in the fleet and engineering team undertook a significant amount of research into data and analysis with the initial plan to update the Service’s Aerial Ladder Platforms. From their research they got into discussions with Rosenbauer UK Ltd who subsequently won a tender to produce a water tower.

During the trial period at Blackburn the Fleet and Engineering team consulted with firefighters to gain operational feedback and ensure the modifications were firefighter led.

John Hargreaves, Fleet and Engineering Manager, said; “Trialling the Stinger at Blackburn proved the worth of an innovative design, delivering outstanding performance at the incidents it has been assigned to and fully justifying our belief in the importance of keeping abreast of changing technologies. We have found the product to be that worthwhile that we took the decision to purchase a second appliance which we believe is money well spent and will be a beneficial resource to the Skelmersdale and Southern Lancashire area.”

The Stinger offers exceptional versatility, serving as a ‘regular’ fire engine to transport and equip firefighters to deal with house fires, road traffic collisions and the range of emergencies likely to come their way whilst additionally providing a facility to jet water a distance of 80 metres onto a fire from a maximum height of 16.5 metres. Additionally, a hydraulically-powered ‘Stinger’ spike mounted on the articulated boom of the appliance can drive through slates, tiles and other building composites, spraying water jets onto the fire within a compartment.

The naming competition will run on LFRS facebook page until 18 September when the entries will then be taken to a panel of judges and a winner will get to see the new name added to the fire engine at Skelmersdale Fire Station. Entries from people of all ages are welcomed however LFRS are keen to see some imaginative names rather than Stingy McSting Face!