Children from South Ribble were presented with awards and prizes on Thursday 6 December at Leyland Fire Station for their work contributing to bonfire safety.

The competition, which has been running for ten consecutive years, invited children from across the South Ribble district to design posters that contained safety messages in the lead up to bonfire

night as part of the Bright Sparx campaign. They were encouraged to think about fire safety messages, concerns over pets and vulnerable people and how to help people who may have had burns.

Forty schools took part in the competition and over 500 entries were received which resulted in many hours of judging by Station Manager of Leyland Fire Station, Steve Barnes, the Neighbourhood Policing Team and local Councillors Michael Tetherington and Matthew Tomlinson.

The posters were split into three categories depending on the ages of the children (Reception, Year 1& 2, Years 3 & 4 and Years 5 & 6). There was one overall winner and six runners up who were invited to visit Leyland Fire Station on Thursday 6 December, to look around the station, meet the crew and receive their prizes.

Bronwen Allcock from Longton Primary was the overall winner and won a Samsung tablet and the runners up received family swimming passes to be used at pools across South Ribble and a family pass to the Worden Park Bonfire Night. 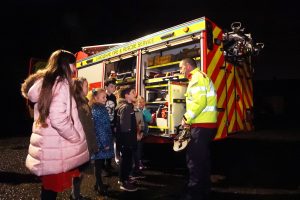 South Ribble Borough Council and Leyland Round Table have supported the project for the last ten years and kindly donated the prizes. They saw the benefit in running the competition and recognised its aims to help reduce anti-social behaviour around Bonfire Night by teaching children of the dangers whilst in schools.

Andy Dow, Community Safety Advisor at Lancashire Fire and Rescue Service Southern Area said: “We’re so pleased that this project has been able to run for the last ten years with the support of local partners. Teaching children about bonfire safety from a young age means they will hopefully remember these safety messages as they grow older. We received some fantastic entries that a lot of time and effort had obviously gone into but a big well done to the winners. And here’s to next year!”