On Friday, 19 November, Lancashire Fire & Rescue Service (LFRS) celebrated the achievements of some of it’s most talented and dedicated people who have received either a Long Service Good Conduct Award, a Star Award, a commendation or an academic achievement.

The Long Service Awards were presented to 30 operational and non-operational staff for 20, 30, 35 and 40 years’ service and meritorious conduct.

Justin Johnston, Chief Fire Officer, also awarded personal commendations for acts of courage and determination to those involved in the Mallowdale Avenue explosion​ in May 2021, the Greece​ wildfires in August 2021 and Dixon’s chimney in Carlisle in 2019. 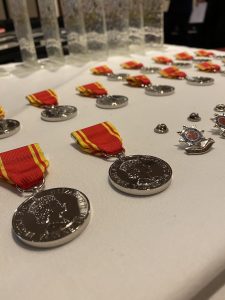 Justin said: “The last 18 months have been the most demanding period in Lancashire Fire and Rescue Service’s history.

“We have been at the heart of the response to the pandemic, supporting communities and public services across Lancashire.

“Whether you are on the frontline or work behind the scenes, these achievements have represented a tireless commitment to serving Lancashire and making a difference to people’s lives.”

Alongside this, the Service celebrated its fourth annual Star Awards, which recognised members of staff, nominated by their peers, for exemplifying Service values.

The awards highlight the often-untold stories of people making a real difference to their colleagues and local communities.

There were a total of 11 for the Awards, with a winner from each locality, a team of the year, a rising star, on-call firefighter of the year, ED&I award and Service Management Team’s (SMT) Outstanding Star.