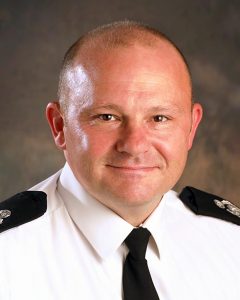 Justin will officially takeover on 1st May 2019 when the existing Chief Fire Officer, Chris Kenny retires.

Justin is a member of the Institute of Fire Engineers (IFE), Institute of Leadership and Management (ILM) and the National Fire Chiefs Council (NFCC) where he is the national lead NFCC Officer for firefighter fitness and he chairs the FireFit steering group.

In his free time, Justin enjoys fell and trail running and has completed numerous long distances running challenges. Justin has a masters degree in Management and a postgraduate diploma in Elite Performance

Justin says: “It is a fantastic honour for me to be appointed Chief Fire Officer of a strongly performing fire and rescue service. I will look to build on the outstanding contribution made by Chris Kenny and I aspire for the Service to be the best trained, best equipped, best accommodated and most professional fire and rescue service in the country. With our dedicated and hardworking staff we will continue working to make Lancashire safer.”

Chair of the Combined Fire Authority (CFA), County Councillor Frank de Molfetta says: “Justin has been highly valued by the CFA since becoming the Deputy Chief Fire Officer in September 2012. His innovation and leadership has played a key role in Lancashire achieving an ‘Outstanding’ for cultures and values in the recent inspection by Her Majesty’s Inspectorate of Constabulary and Fire and Rescue Services. I wish him well in his future role.”