The Minister for the Fire Service, Nick Hurd, has met firefighters from Lancashire Fire and Rescue Service who have been tackling the Winter Hill moorland fire.

He visited the Service’s Training Centre in Chorley, where firefighters and senior officers described the tactics and demonstrated the equipment used to fight the fire. He also had the opportunity to speak to some of the voluntary organisations that supported the response.

Minister for the Fire Service, Nick Hurd, said: “The tireless efforts of firefighters in Lancashire and Greater Manchester and their partners to contain wildfires over the last month have been astounding.

“The Winter Hill and Saddleworth Moor fires were some of the most severe in living memory, and I’m grateful to our firefighters for tackling these fires so effectively and ensuring no one was hurt.

“I was honoured to meet some of the men and women involved this week and thank them in person for their continued service to their local communities.”

Recent rain has boosted firefighting operations, as Lancashire Fire and Rescue Service continues to deal with isolated hot spots on Winter Hill. Firefighters are using tracked vehicles to systematically monitor the 18 sq km site, applying water at high pressure to extinguish any flare-ups. This work is supported by the Service’s drone which can identify hot spots in the peat underground using thermal imaging.

Chris Kenny, Chief Fire Officer at Lancashire Fire and Rescue Service, said: “I was pleased to welcome the Minister and for him to hear first-hand, the challenges our firefighters faced in bringing the Winter Hill moorland fire under control.

“Crews worked long hours in extremely hot and difficult conditions, supported by partners from the public and voluntary sectors. Undeterred, their efforts contained the fire, protected the vital TV transmitter at the top of the hill and threats to life and property were avoided.”

“Despite the devastation this moorland fire has caused, the way in which all those involved pulled together is something of which Lancashire can be rightfully proud.”

At this time the tracks, trails and bridleways around the Winter Hill site remain closed but are being constantly reviewed. The movement of emergency service vehicles and personnel continues, presenting a potential hazard to anyone entering the area and a likelihood that their presence would adversely affect firefighting activity.

Chief Fire Officer Kenny added: “Unfortunately we are also attending wildfires in other areas of the county. My plea to residents and visitors is to take real care and be extra vigilant when outdoors. Disposable BBQs, discarded cigarettes and even rubbish left on the ground can all start a fire.”

The Winter Hill incident began on Thursday 28 June and at its height there were over 30 fire engines in attendance supported by multiple partners, specialist wildfire fighting teams and fire and rescue services from other areas of the country. 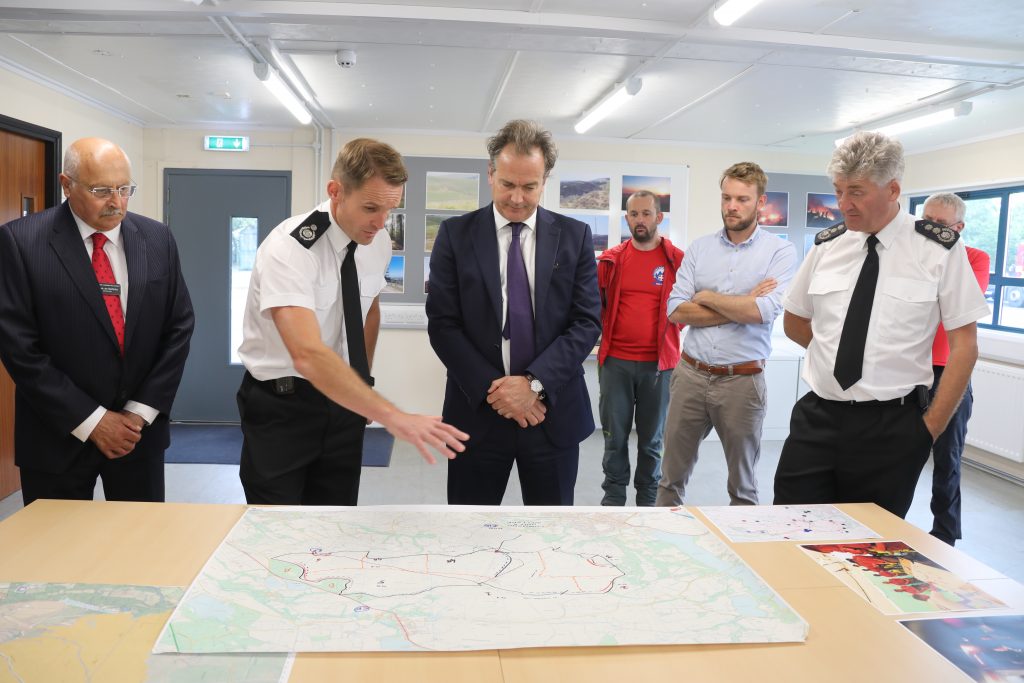